I am not a man. I am dynamite. 5 dynamite ideas Nietzsche can teach Copywriters

by Stuart Shaw
Comments are off 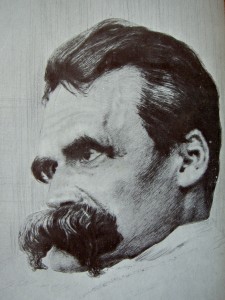 Even if you’ve never picked up a single book, you’ve read or heard some Nietzsche somewhere.

They have preoccupied philosophers and sociologists like Jean-Paul Sartre, Albert Camus, Michel Foucault and Max Weber.

Probably even gave birth to psychoanalysis. According to Freud, Nietzsche had “more penetrating knowledge of himself than any man who ever lived or was likely to live.”

Nietzsche is an inspiration to musicians past and present including Jim Morrison, Marilyn Manson, David Bowie – even Adele.

As Nicholas Ferroni in the Huffington Post points out:

…the person who has used his personal experiences as inspiration and not self-destruction, and who has had more of an impact on the music world than almost any other musician or artist is actually not a musician at all, but a philosopher. That’s right; Friedrich Nietzsche, a nineteenth century German philosopher, probably deserves to win not only a “Lifetime Achievement Award” in music, but he is also deserving of dozens of Grammy’s and an induction into every music genre’s Hall of Fame.

What doesn’t kill you makes you stronger.

Nietzsche is also the go to genius for Hollywood screenwriters who want to give their hero – or anti-hero – some deep-thinking gravitas.

On Taste of Cinema, Lediona Kaspapi finds 15 movies that deal explicitly or implicitly with ‘Nietzschean’ themes and ideas. Ideas like Master-Slave Morality, the Will to Power, Apollo vs Dionysus, the Übermensch, Ressentiment and the Eternal Recurrence (of the same).

You can also add Little Miss Sunshine, where one of the characters doesn’t just read Nietzsche – they don’t talk to others because of Nietzsche.

Eternal Sunshine of the Spotless Mind, where one character quotes from Nietzsche’s Beyond Good and Evil:

“Blessed are the forgetful for they get the better even of their blunders.”

Eternal Recurrence – Nietzsche’s idea that we have lived this life before and will live it again – forms the structure of The Fountain by Darren Aronofsky, Cloud Atlas and – apparently, as I haven’t seen it yet – Jupiter Ascending.

The Wachowskis are – apparently – self-professed Nietzscheans.

Nietzsche’s most famous one liner from Twilight of the Idols – is everywhere. Even if the ultimate existential nihilist, The Joker, gives it a twist of lemon:

“Whatever doesn’t kill you, simply makes you… stranger.”

Okay, you get it. Ole walrus tached Nietzsche is really, really influential.

But let’s say you think that philosophy is dead. And that you just write web content – websites, blogs, ebooks etc. For business that sell patio furniture or accounting software.

What can Nietzsche really teach you – without having to read him? Whether it makes you and your work stronger or stranger, let’s find out.

Nietzsche wrote dynamite book titles: The Birth of Tragedy. Beyond Good and Evil. And, of course, The Antichrist.

Thus Spoke Zarathustra is ‘A book for everyone and no one.’

Twilight of the Idols is subtitled: ‘Or, How One Philosophizes with a Hammer’.

And Human, All too Human is ‘A Book for Free Spirits’.

Who doesn’t want to be a free spirit? Or philosophise with a hammer, whatever that entails?

Of course, he had to shock – he was woefully unappreciated in his own tragic lifetime. But he also believed in the momentous power of what he was saying. Take some of the chapters in his autobiography of sorts, Ecce Homo:

Was he crazy when he wrote this?  A touch. But do they make you want to turn the page? Hell, yes.

And are your headings – and subheadings – as dynamite? And I don’t just mean your blog headings, hopefully designed for max virality.

How about in your Services or Company pages?

2) I approach deep problems like cold baths: quickly into them and quickly out again. 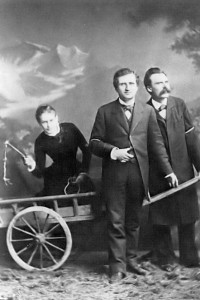 Nietzsche was not a well man.

Whether or not his ridiculous headaches and excruciating stomach problems were the result of a sexual dalliance in a brothel is open to debate.

But even if he wanted to write long books – he was a workaholic – his ailments led him to adopt an aphoristic, almost bloggy style.

Aphorisms that got to the point fast. Packed a hefty knockout punch. And left a lasting impression.

When we have to change our mind about a person, we hold the inconvenience he causes us very much against him.

He who fights with monsters should look to it that he himself does not become a monster. And when you gaze long into an abyss the abyss also gazes into you.

No padding. No fluff. No dross.

Of course, copywriters don’t get much chance to write philosophy. And we don’t pick the brands we work for. Style and substance are often out of our control and imposed on us – though we can and should have a say.

But if you’re writing for a brand that divides opinion, saying what your brand stands for – and what it stands against – gives your target audience something to gravitate toward and stand behind.

Pack every line with whiplash meaning and mean what you say.

3) All truly great thoughts are conceived by walking. 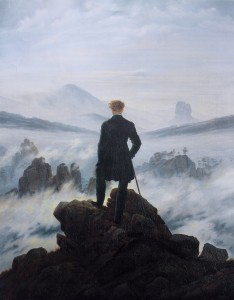 I am rarely asked about my writing process.

Who cares if I write in a tree house, so long as the client is a happy bunny.

But Nietzsche opened my eyes to a way of writing that stuck.

See, Nietzsche loved to take long walks. Traipsing up and down the mountains of Switzerland in search of inspiration.

And he wasn’t alone in his love of walking.

In A Philosophy of Walking, points out that many other writers – Rimbaud, Kant, Rousseau, Thoreau – made walking central to their creative process.

The open road under the open sky. The joy of being immersed in Nature (if you’re lucky).

Personally, I’ve had more Gregory House-like epiphanies plodding around Milton Keynes (it’s greener than you might think, though the cows are a bit stiff) than sitting on my butt staring at the screen willing something – anything – to happen.

But try walking. And not power walking. Not A to B. And without headphones.

Take the pooch if you want, but also take with you a problem you’re working on, let the mind off the leash and see if it isn’t solved when you get back.

It worked for Nietzsche. And Jobs. And it works for me. It might just work for you too.

4) Without music, life would be a mistake.

Nietzsche wanted to be a composer.

But he sucked. Unlike Wagner, who cast a profound spell over the young, highly-strung, philologist.

Of course, I always wanted to be a writer. And reading Nietzsche helped: he had an outstanding mastery of language, second only to Shakespeare or Goethe.

He was also phenomenally well read. From the ancient Greeks to Darwinism, Nietzsche drew on developments in science and literature and was a keen observer of modern life.

Of course, writers are naturally curious. Always on the look out for new ways to say the same problem solving things.

We thrive on the psychology of selling and on understanding what makes people click. We keep abreast of new ideas popping up on sites like Arts and Letters Daily or The Edge.

But don’t stop with the full stop.

The SEO ‘science’ behind what makes blogs such viral hits is something that you can learn and apply to most web pages. How you package up and present your words matters more than ever.

Copywriters also have a duty to develop the businesses they write for. If you’re undertaking competitor research and you spot an opportunity for the business you’re writing for, take the CEO for a walk.

5) Only when you have all denied me will I return to you.

Nietzsche is a marketing genius.

He covers every major subject. Is always challenging and profound. And he talks from the heart as well as the head. From deep learning as well as learning derived from overcoming often deeply painful personal experiences.

But the genius of Nietzsche is that his mission is not to turn you into a card carrying ‘Nietzschean’:

It is to make you become who you are.

Independent and capable of seeing things for yourself and making your own rules and choices. A free spirit free to go crazy with your own giant plastic mallet. Like I said before, who wouldn’t want that? Who wouldn’t pay for that?

Copywriters can learn from this in two ways:

First, by telling brand stories that are human, all too human. What personal problems did the CEO overcome to get here? Is that story inspirational and relatable to the problems your customers are facing?

If we can buy into the person behind the brand as well as what they’re selling, that to me is a win win.

Secondly, by finding the thing the brand does that is bigger than the brand.

Not every brand is selling something bigger than themselves or can tie what they do into a universal human need. But your customers will love you if you offer them more than what’s on offer.

Over a hundred years after he allegedly flung his arms around a horse to protect it from being beaten in a Turin street and slipped irrevocably into madness, Nietzsche’s ideas embrace us from all sides.

No other thinker – perhaps in history – has been so influential.

How much – or how little – his ideas influence your writing or the way you approach your writing, is up to you.

The last thing he – or I – would ever want to do is tell you how to write or think.

But he’s not going away anytime soon. And quoting Nietzsche at parties isn’t the worst play you’ve heard in a while.

If you’ve seen any other movies or read any books inspired by the old man, let me know. I’d love to keep this page current. And if you think Nietzsche can help copywriters think and write better that I haven’t thought of, I’d love to hear from you.