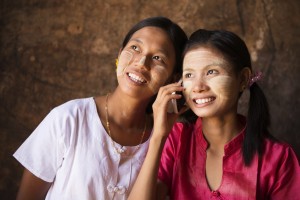 In Bangladesh, 85% of the garment workers – 2.8 of 3.6 million – are women. In Cambodia, with a 500,000 strong industry, that figure is just over 90%. Myanmar – a growing destination for garment retailers – has just 100,000 garment workers, but again 90% are female. But members of the cut, make and trim army in Asia – the hubs of high-street fashion production – are not alone: millions of women toil on our socks and shirts across South America, even closer to home. Women are the garment industry.

Women who are also poorly educated. Unaware of their human or employment rights. Women drawn into the often alien environment of the cramped cities from rural backgrounds, who work phenomenal hours for less than living wage pay – and still manage to scrape enough money to send back to the provinces to take care of relatives.

Of course, after Tazreen and Rana Plaza, the various big brand alliances and accords are focusing their efforts on improving fire and building safety, raising pay, stamping out excessive overtime and tackling that omnipresent issue of unsanctioned outsourcing. But the fact that these workers are predominantly women – while the factory bosses who have cut corners on fire and building safety, farmed work out behind the backs of big brands, and are locking doors to keep workers working while holding back pay – are predominantly male – seems to have gone unnoticed. As has the multitude of other serious problems female workers encounter from:

Issues that are set to make the next round of headlines and mass protests – not to mention lawsuits. But what is interesting is that if these alliances focused on helping the millions of women in these factories tackle these issues themselves, even things like outsourcing or even building and fire safety might not be the headline grabbing problems they are. They might not even be problems at all.

A different approach: from the inside out

Let’s assume here that brands can’t afford or wouldn’t see it as their role to educate millions of female workers. Let’s also assume that they already make it abundantly clear to (male) factory bosses their dim view of any of these issues and conduct the same old program of audits and inspections, even though the garment world has been failing with this approach since the first sweatshop scandals of the 1990s: not all male factory bosses are greedy, corrupt, violent or duplicitous, but enough are to make betting everything on them to finally see the light and change their ways is at best a risky bet. But now let’s suppose that instead of working top down or outside in – brands go for a bottom up approach and start a two-way dialogue with women in factories.

Through mobile phones – half of Cambodia’s garment workers have access to a mobile phone – they offer a service giving women confidential and free access to information such as:

Such a service would be easy, quick and cheap to set up and run – we are not talking smart phone apps here. It would reach millions of workers, especially given the collaborative stance of current initiatives in Bangladesh (easily replicated from Pakistan to Peru). But crucially, it would enable them to use knowledge of their rights to negotiate improvements in wages and even tackle discrimination, elevating women into positions of authority within factories, which in turn will help change their abusive and degrading culture from within.

Letting them be your eyes and ears on the ground

Given the number of factories, many off the audit and inspection radar, not to mention the prevalence of homeworking, having 90% of the workforce as your eyes and ears on the ground would also be a better faster and cheaper solution than hiring and training (expensive) inspectors just as prone to having the wool pulled over their eyes about conditions from the all too powerful (male) factory bosses.

We are not arguing that tackling fire and building safety, or pressurising governments and factory bosses to offer a living wage, aren’t vital. But prioritising women’s rights serves the dual purpose of both helping women help themselves in places where brands can’t reach; but also raises them into the management ranks where corner cutting on fire and building safety or outsourcing won’t be tolerated. All you need to do is give them a call – and help them call you – and together you can shape the future of the garment industry. As future customers, one day they might just thank you for it too.

For more information about how our mobile and web supply chain solutions can help transform your approach to supply chain standards, contact us on 01908 330242 or email [email protected]